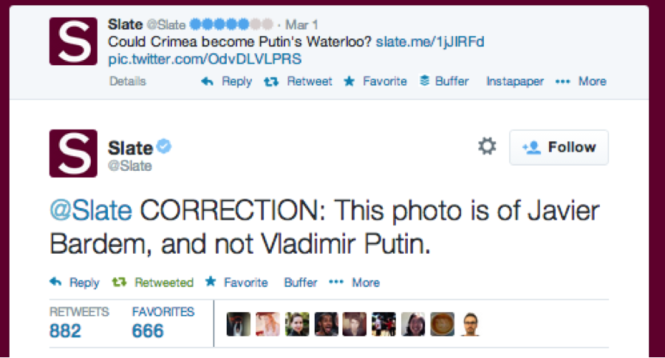 Nobody likes publicly admitting they have made a mistake, and journalists are no exception. Indeed, to their readers, viewers and listeners, at times they seem actively averse to saying they are wrong, which is one reason why journalists languish at the lower levels of trust surveys. As one of few professions that lives by exposing their work to public scrutiny, warts and all, such reluctance to acknowledge their own errors can seem deceptive, deluded or hypocritical.

But there are several good reasons why journalists should publish corrections, with or without an apology.

Truth and accuracy are cornerstones of professional journalism, so publishing or broadcasting something untruthful is a major failing; the sooner mistruths can be rectified the better. A correction also sets the record straight. Although a correction will not appear at the same time or in the same place as the original, it will not leave an error uncorrected for future readers or listeners. In online stories, a correction can accompany and counteract the original error.

False information will not stay hidden anyway. More than four centuries ago, William Shakespeare reminded us “the truth will out”, meaning that however much one might try to hide mistruths, they will eventually be revealed. If known errors are not corrected by you, they will be revealed by someone else, undermining your reputation.

As a positive, corrections and apologies strengthen a journalist’s relationship with their audience. Far from undermining the confidence of readers, viewers or listeners, issuing a correction and apology says to them that the journalist respects them and trusts them to forgive.

For the profession as a whole, making a correction can help to disprove accusations that journalists only spread false or fake news. Because everyone makes mistakes, an individual or media organisation that never admits to making an error is obviously lying.

Specifically, corrections are fair to the people about whom the mistake was written. If information about a story source, commentator or interviewee is wrong, it can make them appear untrustworthy or foolish, so a correction can restore the reputation the journalist may have damaged. Many people who come into contact with journalists feel they “never get things right”, so to remedy this, when journalists make mistakes they must demonstrate they don’t do it on purpose and can be trusted to correct errors.

Finally, in cases such as defamation where an error has legal ramifications, an attempt to correct an error will be recognised in court as an effort to minimise harm and so may reduce any penalties.

What are corrections, clarifications and apologies?

A correction is simply admitting that wrong information was provided to one’s audience and should be replaced by the new information. An apology takes this one step further, offering regrets that the correct information might have done harm to someone.

A correction might also offer an explanation as to why the error was made, perhaps names were transposed or words were missing from the published story.

A clarification is a kind of correction – without admitting there was anything wrong with the original article or item. A clarification is usually phrased as presenting less ambiguous or new information not contained in the original story. Clarifications are often made in response to complaints by people identified in the original piece in circumstances where the journalist does not feel the need to admit to a mistake, just to clarify something. For example, if someone complains that a story implied they had done something wrong, the clarification might state: “The Herald did not intend to suggest Mr So Andso was in any way responsible for the accident.”

When and where to make a correction and/or apology

Ideally, a correction should be published as soon as the journalist knows a story was misleading or facts were wrong. This will minimise the chance of damage. In live broadcasting that can range from correcting an inaccuracy as the reporter or anchor is speaking (for example “I’m sorry, that should be Lisbon”) to correcting it at the end of the bulletin. If the station plays the wrong report or interview, it should apologise to its listeners at the time, rather than let it run without mentioning it. That is disrespectful to the listeners.

If the journalist cannot correct an error straight away – perhaps because they don’t know the correct facts – they you need to plan how they can correct it at the next opportunity – perhaps the next bulletin or during the same bulletin the following day. It is important they consider whether the same people might be listening or viewing as heard the original error.

For print media, it is generally expected that the correction will be made in the next edition or – if time is required to consult a supervisor or lawyer – in the next appropriate issue. It is also ethical to give the correction similar prominence to the original story, perhaps on the same page in the relevant edition or attached to a follow-up story. It is not ethical to try to hide the correction. This will not satisfy either the conditions listed above or the readers affected by the original error. [See the Case Study below.] In many countries, Press Councils or Media Authorities, when adjudicating a complaint about an error, might insist the correction be placed in the same place in the paper, magazine or program as the original article.

For online media, the correction can be made to the posted story but there should also be a reference to the correction in a footnote (or Editor’s note) at the end of the revised story. For example, “Correction: Comments attributed to John Smith in an earlier version of this story were, in fact, made by Joanna Smith.”

In social media, the correction can be made in a re-edited post where possible (with reference to the original mistake, as above) or in a follow-up post or Tweet, again making reference to the earlier post. The important thing is that your readers are not left with the wrong information. For more on publishing re-edited Tweets, see “unpublishing” below.

How to frame a correction and/or apology

Corrections and apologies should not make matters worse. If a journalist makes a correction or apology, it must be genuine and clearly expressed. There is no point in correcting an error that leaves the audience more baffled or in apologising reluctantly in such a way that the people to whom it is directed do not recognise or accept it.

Journalists working as part of a team should seek guidance and advice from their colleagues. If they work in an organisation with different levels of responsibility, they should seek approval from their supervisor before drafting and publication. If the matter has any legal implications – and many seemingly ordinary mistakes can eventually lead to legal action –legal advice should be sought, perhaps from the company lawyer, about making corrections or apologies.

In particular, an apology should address the issue for which one is apologising, not other issues or even the reaction people might have had to the original error. There is no excuse for publishing fake and half-hearted apologies, such as “we are sorry some people feel offended”.

That will only make matters worse by blaming people for feeling offended.

Be honest and clear: “We apologise for any offense the imputation may have given readers and those people concerned”.

An apology can say there was never intention to offend anyone, but it should still admit when something written or said in error did cause offence.

In October 2020, an Australian court had to step in to force a broadcaster to publish a genuine clarification in a more prominent place on its website after the network tried to hide it in a page rarely visited. The case started when Channel 10 reached an out-of-court settlement with a man who said they had implied he killed his partner. The network agreed to publish a clarification, but then inserted it on their Terms and Conditions page, which Federal Court Justice Anna Katzmann said was “a place where it was highly unlikely to come to anyone’s attention”. She called 10’s action “an act of bad faith” and ordered they republish the clarification on a page of the 10play website relating to the program where the original implication was broadcast.

You can read a report of the case here.

Many major news organisations in free press democracies have clear in-house policies on corrections and apologies, with senior staff designated to deal with them. The Washington Post, for example, publishes details of its system online, for transparency. The New York Times not only makes information available on complaints and corrections but it has a special page online where it publishes all stories that have been corrected. Although the British Guardian newspaper also has a special online page for complaints and corrections, they are partly hidden behind a requirement to “register to keep reading”, though registration is free.

Australian media are generally less helpful and less proactive towards receiving audience complaints and publicising corrections. Although the Australian Broadcasting Corporation has complaints-handling procedures, the ABC’s online “Corrections and clarifications” page contains only brief information about the specific error corrected, unlike papers like the New York Times which re-publishes corrected stories in their entirety. As of May 2022, News Corp in Australia made its readers and other stakeholders fill in forms on their Contacts page or search pages such as Frequently Asked Questions (FAQs) for information on how to complain or correct published stories in News Corp media such as news.com, the Daily Telegraph or The Australian newspaper.

Unpublishing online, by removing an already published article, blog, social media post or other material, may seem a simple, straightforward way of dealing with matter which contains errors or is the subject of a complaint. In theory, it simply disappears.

However, there are several issues associated with online unpublishing that can make it controversial or even wrong.

Although the practice of unpublishing has been around as long as internet journalism, the issue has become increasingly relevant as traditional publishers move online and as people realise that what they publish (or post) can have long-lasting negative effects on their own futures. Numerous cases have emerged where people with valuable public profiles – such as actors, artists and politicians – are called to answer for things they said or posts they made to social media years before.

Typical of such a situation was that of Australian electoral candidate Katherine Deves who found herself selected to run for the conservative Liberal Party in a Sydney seat that had voted out their previous MP – a hard-line conservative former Prime Minister – for a more progressive independent candidate. Realising she would be out-of-line with this trend in the constituency, Deves deleted hundreds of social media posts she had made over the years attacking transgender young people. Unhappily for her, copies of these posts in archives and on other people’s threads emerged during the campaign and Deves lost, despite the personal backing of then Liberal Prime Minster Scott Morrison. Unpublishing her posts was Deves’ attempt to bury important information about her politics and character, and the result showed how such actions can be fraught with perils.

We will discuss unpublishing at greater depth in a separate article and you can see how journalists are advised to handle the issue here at The News Manual.

FOOTNOTE: There are many articles online advising how to handle corrections and apologies. This from the American Press Institute is just one.