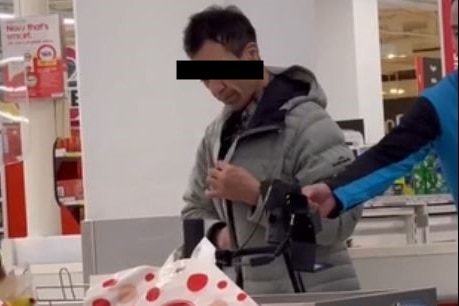 The case of a 21st Century good Samaritan whose act of kindness backfired should remind us all how treacherous are the waters around privacy and public interest and how good intentions can often go badly awry.

It also serves to highlight an issue that should be front of mind for every principled journalist, the distinctions between ethical and legal behaviour … or why “can” is not the same as “should”.

The issue burst into social media consciousness yet again when Rustam Raziev undertook a random act of kindness for a stranger named Esa who says it almost ruined his life.

To recap, Raziev, who calls himself a “content creator”, pre-paid a Melbourne supermarket checkout for A$33-worth of groceries being bought by Esa*, a man he had never met. Raziev did not ask Esa or tell him what he’d done. Esa only found out weeks later, when a TikTok video of him at the checkout was posted on the Internet (see the image above).

Esa, who came to Australia in 2001 as an asylum seeker from Afghanistan, was shocked because of the publicity and felt shamed because people he knew might assume he was too poor to pay for his own groceries.

Raziev later apologised for his actions, saying he had only tried to do some good during the holy month of Ramadan to show the world an example of helping people without reward or even thanks.

By that time it was too late for Esa; the video had been seen by six million viewers around the world.

You can see a report of the event with commentary here, on the ABC.

This was not an isolated incident. A week before the story broke, a woman also in Melbourne had been left holding a bouquet of flowers, an unwitting gift from another “content creator”, Harrison Pawluk, whose “team” had filmed and posted his act of kindness. The woman, who had simply been sitting in a public place when approached by Pawluk, had not been happy to know the viral video had been viewed 57-million times. She reportedly said the whole affair left her feeling “dehumanised”.

These and many other similar stunts – whether cruel or thoughtless pranks or misplaced acts of kindness videoed and posted on the Internet – raise several issues for everyone using social media, and for working journalists, whether they post to social media or broadcast in their programming.

At its very basic level, one must ask whether it is fair to co-opt innocent people into content creation without their knowledge, whether it was a joke or a genuine act of generosity. In democratic societies, people expect to be free to do things in public without being watched. Yes, we mostly accept being surveilled on CCTV to combat crime, but there are usually restrictions on who may see the footage and how it can be disseminated. We do not consent to random strangers doing it without our knowledge.

Some critics have pointed to the fact that content creators actually make money out of videoing their furtive interactions for worldwide consumption. They are therefore commercially exploiting their victims, however pure their intentions or benign their motives. A column in the Sydney Morning Herald was headlined: “Random acts of clickbait have little to do with kindness”.

For all of us – and for journalists in particular – these cases open up the specific professional issue of recording and publishing or broadcasting without someone’s knowledge or consent.

In the Melbourne supermarket case, Raziev’s spokesperson was quoted as saying: “His videos are filmed in public places and so technically do not require consent.” This is true in many countries and generally around Australia, though varying slightly from state to state.

Journalists should know it is against the law to record someone’s conversation for broadcast without their knowledge or consent, except where they can demonstrate a real public interest (or public benefit), for example in exposing wrongdoing.

Journalists should also know they cannot record people on private property without their consent, though the law is often imprecise about what is private and what is public space. A street is obviously public space but a covered shopping mall might also be considered private property. It is the journalist’s responsibility to find out in circumstances where it is unclear.

But even in a public place where it is legal to film or photograph people without their consent, it might still be unethical.

This is where “can” often conflicts with “should”. Just because you can (legally) record someone against their will or in circumstances where they are distressed, should you?

Just as content creators like Raziev and Pawluk justify intrusion because their motivation is sincere and their actions generous, journalists cannot simply hide behind the catch-all excuse of “the public right to know”.

There are many ways of telling a story. Most of them have alternative methods and not all are so important to justify invading people’s privacy or trampling on their feelings.

In this earlier post in The News Manual Now! we looked at the arguments for and against using graphic photos and footage of people in extremis, not just from the perspective of sparing viewers distress but also out of respect for those involved, the victims of an event and its consequent news coverage.

We offer some more guidance in Volume III: Ethics and the Law of The News Manual, as well as in Chapter 55: New media and social media for journalists. But in the end, of course, it is for journalists themselves to decide whether they wish to behave ethically and how they can do it in each unique circumstance.

* Reporting of this issue has generally refrained from using Esa’s full name to protect him from further embarrassment. We have taken the added precaution of disguising his face.