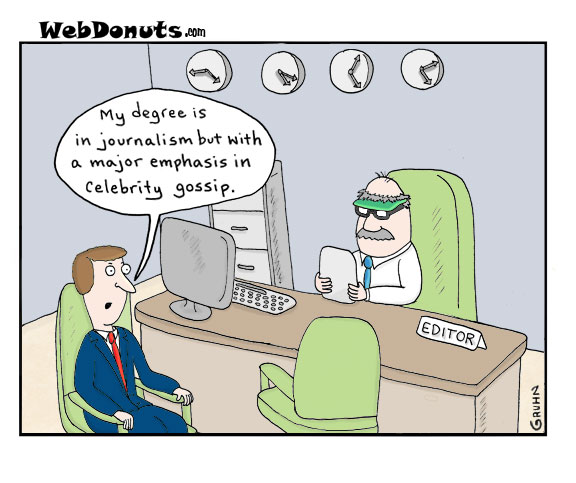 WWWWWH is one of the great and timeless concepts of journalism. As we discuss in The News Manual, these six questions – Who? What? Where? When? Why? and How? – are supposed to be answered by all stories, even when occasionally an answer is Null.

But finding the answers to each are not equal. Sometimes the “how” is obvious but the “why” takes more effort to discover. In crimes or road accidents, it might be evident “what” has happened without being clear “who” was to blame.

And they’re not equal because journalists themselves are not always interested in the WWWWWH equally. Individually, some journalists are more interested in investigating why something happens than in piecing together how an event unfolded.

Though a career in journalism offers multiple pathways for specialisation in a host of fields, from science to music and from economics to crime, it is often said that a journalist is “a Jack of all trades but master of none”, knowing about a lot of things but not necessarily an expert in any one.

Additionally, a career in journalism does not demand a certain personality type, unlike pilots who must be meticulous or artists who should be imaginative. Journalism is a field where almost all personality types can succeed – especially if they follow the basic precepts of truthfulness, accuracy, objectivity, impartiality, fairness and accountability.

But while almost anyone can be a journalist and take an interest in all the WWWWWH issues, there are still inclinations within each person to be stronger in some attributes than others.

So what kind of journalist are you?

Given that any categorisation of large numbers of people can be little more than generalisations, the following roughly describe each of the main WWWWWH types.

What: Wants foremost to describe an event or a behaviour. “What” journalists make great hard news reporters and thrive on the adrenalin of breaking news. They enjoy describing what is happening and often have a good eye (or ear) for detail. They are happier out in the field than behind a desk or in a studio and at their most extreme they thrive on risk and danger, such as in wars or disasters. While all journalists must cover all the WWWWWH questions, “what” journalists love to be where the action is and work best in media that is always moving forward, such as radio and television news.

How: Like to look behind the event or behaviour to understand how something is happening. Like “why” journalists, “how” reporters enjoy explaining events in greater depth than their “what” colleagues, putting developing news in context to show the background and build-up to the event and placing it in a wider frame so people can understand it better in relation to their own lives. “How” journalists make great feature writers and documentary makers, especially in specialist areas such as health, education, economics and other fields affecting ordinary people. If their audiences can understand how something newsworthy happened, they can adjust their own lives accordingly, where relevant.

Who: Interested in the people involved more than in the event itself. “Who” journalists usually find most satisfaction in longer form journalism, especially in interviewing. This means feature writing in print and extended interviews in broadcasting. News is about people so while all journalists should try to tell stories in human terms, “who” journalists often find the people more interesting than the events in which they are involved. Their subjects can be from any strata of society though they most commonly come from the extremes, telling stories about the most downtrodden or those who have overcome great hardship or made notable achievements in their field. In the higher reaches of the social scale, many journalists make a living – and reputation – covering the lives of celebrities for audiences who want to know how the rich and famous live – and occasionally fall.

Where: Location, location, location is everything to “where” journalists. Fulfilling one of the main drivers of young journalists to explore the world, these journalists love nothing better than being out on the road, either travelling the world or exploring their own coverage area. They don’t thrive behind a desk or in a studio because the lure of “somewhere else” is always calling to them. The pinnacle of pure “where” journalism is the travel writer where the writing and reporting only enhances the experience of being there. In hard news, “where” journalists can always be seen in the midst of a disaster area, on the front line of a war, in the centre of a protest or doing a stand-up to camera from the crime scene itself. There is nothing wrong with being a “where” journalist, as long as you remember your job is to report to your best ability for readers, viewers and listeners who cannot be there themselves.

When: Time matters most. “When” journalists are most alive in the past or envisioning the future. In other professions they might thrive as historians or scientists, maybe cosmologists. Like “how” and “what” journalists, they must be able to describe events well – even those in the distant past – but their main challenge is to make their stories relevant to contemporary audiences. History can be interesting in its own right, but is especially so when it relates to what audiences are doing now. Backgrounding an old conflict will bring forward lessons for people living today, especially those whose forebears fought in them. And most specialist reporters need skills in projecting their story forward to give it relevance into the future as well as a view into the past. A story about a medical breakthrough must include answering the question “what next?”

Why: The biggest question of them all. Last but certainly not least, asking “why” should be at the heart of all journalists’ work. But not all journalists will be good at the disciplined thinking and detective work needed to discover and communicate why something happened the way it did. “Why” journalists usually don’t feel the driving need to be at the scene of events like “who” journalists to report on the “what” and the “how”, though they might attend the scene to ask people why they think something happened the way it did. Opinion columns and talk radio are overburdened by “why” journalists, though often because they want to promote their own obsessions or prejudices. Genuine, professional “why” journalism requires discipline, open-minded inquisitiveness, honesty and objectivity if their reports are to be useful for their audiences. It also requires stamina to collect and analyse complex information, so is best suited to longer-form reporting such as feature writing, current affairs and documentary making. Panel shows with experts can be another form, though to rise above mere entertainment, issues need sober and critical analysis from experts, not just a variety of prejudices from articulate panellists, including those involved in the events themselves.

Of course, the ideal journalist is driven by all the WWWWWH questions, but there is no such thing as “an ideal journalist”. We all come into the profession for different reasons, with different skills and different strengths. The world of journalism is wide enough to provide opportunities for everyone.

No matter what the main drivers of your journalism are, you cannot expect all your readers, listeners or viewers to share them to the same extent. Many of them will be interested in the answers to other questions, so you must answer them all … as any good journalist should.