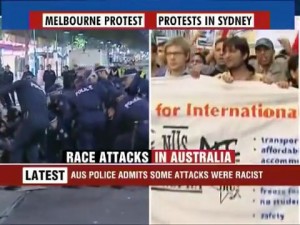 [This article was first published in DogBitesMan and New Matilda on 12 June 2009.]

Attacks on Indian students in Australia — and the protests they have sparked — have given the nation another of its periodic chances to examine its credentials as a friendly, peace-loving, multicultural society.

This happens every couple of years, usually prompted by dramatic headlines which most recently have ranged from anti-Lebanese riots in Cronulla to increased arrivals of boatpeople. This time the issue revolves around racism: Is Australia a racist nation or just home to a small cadre of racist ratbags?

The dominant domestic reaction has been to hose down the moral panic, from Prime Minister Kevin Rudd to Sydney student leader Ruchir Punjabi. Columnists like Paul Sheehan and Miranda Devine have also had their say on the matter. Aside from a few here and overseas who want to fan the flames, most Australians wish to see the attacks as aberrations not symptomatic of a greater sickness.

The standard argument goes like this: Australia is not, at heart, a racist nation and most Australians are fair-go egalitarians opposed to racism. Yes, some Australians are openly and actively racist but we’re no worse than any other country, including India.

Which might seem fine as far as it goes. But some people have a problem with the last point, not because it’s untrue but because we’re meant to believe we’re better than everywhere else. Liberal MP Tony Abbott boasted in 1997 “Australia is the best country on Earth to live in”, and 10 years later the controversial Sheikh Taj El-Din Al Hilali echoed these sentiments when he said: “Australia is the best country in the world.”

While it’s hard to put a number on how many attacks on Indian students there have been in Australia in the past year, there are estimates getting play in the media of hundreds. A common note in all the condemnations from the Prime Minister’s down is that racism is not only unacceptable but also untypical “in multicultural Australia”.

“Australia is a country of great diversity, harmony and tolerance,” Mr Rudd said. “We are a multicultural nation and we respect and embrace diversity, diversity which has enriched our nation.”

Yet many critics are increasingly questioning that claim. They believe that as far as multiculturalism is concerned, Australia has dropped the ball.

Emeritus Professor Laksiri Jayasuriya, one of the doyens of multiculturalism in Australia, has been warning for several years of a crisis in multiculturalism. He lays much of the blame on the Howard government’s legacy of “new nationalism”. He says: “One of Howard’s achievements was to reframe the crude xeno-racism of the Hanson era in a more sophisticated language of public discourse which has not been repudiated by Rudd.”

Professor Jayasuriya attended the birth of Australian multiculturalism in the early 1970s. His appointment to the Whitlam government’s Immigration Advisory Council was, he thinks, the first appointment of an Asian to a government advisory body.

Under a managerialist system, things must have a practical, measurable value in order to be justified. It is little wonder, therefore, that some undereducated young men — seeking someone to blame for their problems — do not see any great value in Indian students. Indeed, occupying Australian college places and taking “our” money and skills off to India actually imbues them with negative value. At least with old-style egalitarian or liberal multiculturalism respect for difference was decreed from on high, not left to individuals to determine, and especially not to disenchanted thugs.

Of course, Commonwealth governments haven’t been alone in winding back multiculturalism. As I examined in my earlier article, “Can the Ethnic Lobby Save SBS?”, by the beginning of this decade a dysfunctional federal opposition had left the Labor states to shoulder the burden of multiculturalism. Some like Steve Bracks’ government in Victoria and Geoff Gallop’s in Western Australia kept the vision alive. Others like Bob Carr’s government in New South Wales continued to distance themselves from it. By 1999 Carr’s government had clashed head-on with the ethnic lobby by withholding its annual grant to the Ethnic Communities’ Council of NSW, whose leaders opposed reforms to the state Ethnic Affairs Commission, including a deeply symbolic name change to the Community Relations Commission.

However, it is perhaps unfair to blame governments alone. Critics argue that the other three pillars of multicultural practice — the media, academia and the ethnic lobby — have not performed much better in the last decade or so.

The mainstream media lost interest in multiculturalism some years ago, partly because it didn’t make such gripping copy as Lebanese crime gangs or tidal waves of boat people and partly because even the more liberal outlets such as the The Age, Sydney Morning Herald and the ABC thought the battle for multicultural harmony had been won. It has been several years since the media employed specialists to report on cultural diversity.

Most of the ethnic press is not really multicultural, being mostly focused on individual language communities and the homelands. Ethnic community radio was hit when broadcasting deregulation allowed foreign radio and TV to beam in programming almost exclusively from overseas. Australia’s only professional multicultural medium, SBS, turned away from the multicultural and multilingual focus of its charter in order to chase “all Australians” (if one can define “all” as the fewer than one in 10 viewers who watch its flagship motoring show Top Gear).

Academics and other cultural theorists, who constitute the third pillar of cultural diversity, work largely unnoticed by the Australian community and policymakers. This is partly the result of a more cluttered communications world and partly a shrinking of political discourse away from the deeply-suspect “intellectual elites” towards more prosaic number crunching in the marginal constituencies of Howard’s “Aussie battlers” or Rudd’s “working families”. Back in 1996, Melbourne academic Nick Economou exposed the myth of the ethnic vote, and politicians took his message to heart.

And this is where the blame for the decline of multiculturalism intersects with the fourth pillar: the communities themselves.

Even supporters will admit that multiculturalism is not as necessary now for national transformation as it was in the 1970s, when the memory of White Australia still hung like a dead weight round the nation’s neck.

After the great flowering of multiculturalism in the 70s, 80s and early 90s, the once powerful ethnic lobby itself fragmented as communities pursued their own interests, often more from necessity than choice. The older European migrants were dying and their children and grandchildren became absorbed into the greater Australian society. The newer Asian communities grew used to fending for themselves and though they tried to take leadership on ethnic councils, their efforts were often unsuccessful or short-lived. Faced with opposition from the entrenched power groups from old Europe, they fell back on their own resources.

This move to ethnic self-sufficiency was exemplified by the emergence of mono-ethnic movements. The most obvious are disparate Australian Islamic organisations ranging from the moderate Islamic Council of Victoria to shrill religious conservatives like Sheikh Hilali. Whether by design or coincidence, there has also been a strengthening of the Jewish lobby in Australia, with the traditionally moderate NSW Jewish Board of Deputies and B’nai B’rith being replaced in public debate by the more strident Australia/Israel and Jewish Affairs Council (AIJAC). For different reasons, both groups saw the traditional multicultural organisations as no longer willing or able to protect their interests.

Some in the older European communities have actually been hostile to newer waves of migrants, especially those from Asia and the Middle East. Although the flourishing of multiculturalism in the 70s and 80s protected the Vietnamese and Cambodian boat people from the worst of this inter-ethnic racism, many of the older migrant communities and leaders stayed largely silent on the plight of the Iraqi, Iranian and Afghani boat people. Ironically, it was mainly Anglo-Australian small-l liberals who took up their cause, with only minor and sporadic help from what was left of the ethnic lobby.

This, therefore, is the context of the debate today over the latest outbreak of racist violence. The greatest irony — and perhaps the ethnic lobby’s greatest shame — is that apart from some Indian voices themselves, most of the current national self-examination is again being done by Anglo-Australians.

[This was the second part of a two-part series on the place of the ethnic lobby in Australian society and the multicultural media, especially SBS. Commissioned by New Matilda, it appeared in DogBitesMan.net in June 2009. You can read the first episode here.]