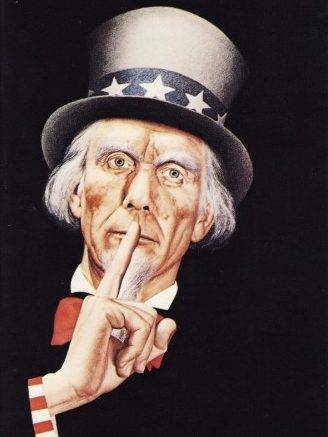 [This article was first published in August 2013 and subsequently updated.]

The Internet is approaching a crisis. Authoritarian regimes censor and manipulate it to suppress dissent, western governments pursue online whistleblowers and Wikileakers, big business wants to track consumers’ every move. Supposedly liberal governments from the United States to Australia have proved as eager as their conservative predecessors to constrain it. And the media? They have largely been silent, uninterested, distracted or disempowered by the rapid collapse of the “free Internet” dream.

Government of any kind has always been a tug-of-war between the governors and the governed, and there has been a convention in western democracies – mimicked to varying degrees in totalitarian states – that the media, the Fourth Estate, is there to mediate, to feed to the people information on what governments are doing and feed back to their rulers the concerns of their citizen-electors.

Even for broadcasters and newspapers that still care about truth and the citizen’s right to know, it is becoming increasingly difficult for journalists to do their job in the Internet age. Ironically, as journalists enjoy an unprecedented array of electronic tools to research, gather, exchange, produce and disseminate news, these very technologies are proving to be double-edged swords.

This is the crisis we are facing – that the democratising Internet, Wi-Fi, smart phones and social media upon which individuals are increasingly dependent are at the same time becoming a tool of control, from backward totalitarian states to advanced western democracies.

In this context, a tiny e-book by a relatively unknown British journalist becomes important.

Deep Web for Journalists: Comms, Counter-Surveillance, Search by former war correspondent Alan Pearce is essentially a guide to using what could be an invaluable resource for journalists and ordinary citizens alike – the Deep Web.

Also known loosely as the Deepnet, the Invisible Web, the Darknet, the Undernet or the hidden Web, this virtual underground exists alongside, entwined with but subtly separate from the e-world that most of us know.

The Deep Web flourishes because it is not the Surface Web, the one most people know and use. The Deep Web exists for all sorts of people who, for a variety of reasons, want to protect their privacy or disguise their activities.

The dangers of entering the Deep Web are not just that one may be rubbing shoulders – even in a virtual sense – with some pretty unpleasant people, but that it exposes the seeker to suspicions that simply by going there they have something sinister to hide, something antisocial, perhaps even dangerous. So it is a brave person who not only ventures into the Deep Web but also writes about it and advises others how to navigate the virtual tunnels of this world.

Deep Web for Journalists is a slim e-volume written specifically for working journalists and media companies increasingly engaged with and affected by the digital world, though it might be a useful tool for non-journalists too.

Its 66 pages range over some well-covered topics such as computer security, advanced search tools and enhancing Internet privacy on platforms from the Internet to mobile phones. But it is at its most enlightening and occasionally disturbing in its guidance on accessing and using the Deep Web. For example, many people will have heard of Tor but are wary of entering its virtual portals because of the tales of scammers, criminals and paedophiles lurking there, ready to rip off, rob or pervert the unwary. Pearce attempts to reassure that Tor is not as dangerous as it is reputed, by giving some very specific information on how to navigate this other Internet in relative safety.

A cursory scan of Deep Web for Journalists might lead novice readers to suspect Pearce is just another conspiracy theorist raging against Big Brother surveillance and the ever-shrinking perimeters governments throw round their citizens’ lives to protect them from the bad guys, in whatever form they might take.

But even in so few pages, Pearce lays out a plausible thesis that the Surface Web is now so utterly compromised that privacy and security for working journalists – or anyone for that matter – is so unreliable as to be increasingly useless as a means of researching, newsgathering, reporting or filing controversial stories, communicating securely, protecting sensitive sources or even their own notes, video footage or audio from hostile forces such as oppressive regimes or unethical business practitioners. 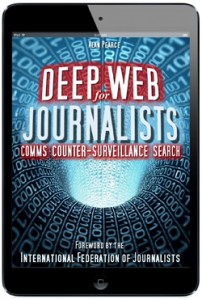 It is worth noting here that although Westerners will tend to read Deep Web for Journalists through the prism of their experiences on home turf, this book is probably of even greater value to journalists working under recognisably oppressive regimes hostile to the free flow of information among their citizens. Countries such as North Korea, Syria or Iran are obvious[i], but it is worth remembering that some 86 per cent of the world’s population live in countries where there is significant government interference in the free operation of the media[ii].

Many governments pay lip service to the principles of a free media and even enact legislation to enshrine it in their legal systems, but very few of them can resist the urge to flout it for reasons of national interest or national security, of which the so-called “global war on terror” (GWOT) is just the latest example.

Governments and corporations have for centuries desired to control the flow of information to citizen-consumers, but the growth and spread of the Internet and e-world technologies have exposed not only their double standards but also an increasingly alarming trend by governments of all political persuasions to reduce the media’s independence while also prohibiting discussion of the fact they are doing it.

Governments are refusing to tell us what they are not telling us.

Pearce has felt the sting of this in trying to disseminate Deep Web for Journalists. He says he is finding it difficult to get any mention at all in the mainstream media even of so-called free-press democracies.

Publication of Deep Web for Journalists seems to have become ensnared in a British Government’s D-Notice issued in June this year to prevent coverage of surveillance tactics employed by intelligence agencies in the UK and US. Although the D-Notice is only an “advisory” to editors, very few British media outlets will even mention it, let alone discuss the issue it is meant to hide, the workings of Western intelligence bodies such as the US National Security Agency (NSA) in rifling through anyone’s emails and other data files using programs like PRISM and XKeystore.

Pearce believes few media outlets in his home country are brave enough to buck the system even to mention Deep Web for Journalists, which is perhaps proof of the timeliness of his book.

In Australia alone, electronic intrusion is starting to become a subject of public discourse. The Sydney Morning Herald ran a feature article on communications privacy in Australia headlined “Tracked from the moment you wake”, highlighting the inroads the commercial world is making into the lives of consumers, tracking them via their keyboards and smartphones to secretly manipulate their buying behaviour under the guise of providing “enhanced consumer experiences”.

Then Herald journalist Philip Dorling broke the news that intelligence agencies in Australia, Britain, the US and Singapore had formed a partnership to tap into phone and Internet traffic on the main undersea fibre optic SEA-ME-WE cables linking Asia and Australia, the Middle East and Europe. Australian National University professor Des Ball is quoted as saying intelligence collecting from fibre optic cables had become extremely important because these communications channels carry more than 95 per cent of long distance telecommunications traffic. The article named commercial telecommunications providers that were involved.

The ordinary citizen is assailed on every side.

And according to Pearce, the very tools we cherish to make our lives richer, the Googles, Facebooks, Twitters, smart phones, Wi-Fi, cloud storage, these and many more are increasingly being turned against citizens and consumers. People think they are safe because their smart phone is switched off; think again, says Pearce. Even off, they may have apps beavering away, ready to betray them when next they connect or if the device falls into hostile hands.

These and a myriad of claims about the dangers of using the Internet, smart devices, software and social media are, of course, not new. Neither is advice on how to minimise the risks. Where Deep Web for Journalists scores is in the very practical links Pearce provides, so instead of just thinking about one’s security, even readers with only basic technical knowledge can take immediate practical steps to improve their privacy.

For example, instead of sending sensitive messages by emails that could be intercepted, why not simply save them in webmail Drafts and provide one’s correspondent with access details to that account? Worried about those details being intercepted? Pearce provides clever workarounds for that too.

If there are criticisms of Pearce’s work, they are relatively minor compared to the value of the whole. This reviewer would have liked a more in-depth exposition on why journalists should resist intrusion and censorship. An Introduction by the President of the International Federation of Journalists, Jim Boumelha, touches on this, but the rationale needs to be stated more clearly, especially for those willing to close their eyes to all sorts of abuse – especially by governments or corporations – on the grounds they are doing it to protect us or improve the economy.

There are strong moral and practical arguments against the damage censorship and media control inevitably does to the whole of society, beyond making life difficult for the media. I examine this thesis here in relation to censorship in China, though the arguments can be extended to almost any nation.

Another minor flaw is perhaps inevitable in the online age, given the speed of change; some of the links are dead, probably from natural causes, though in the context of Pearce’s theme they could have been killed. In a phrase usually attributed to Joseph Heller’s satirical novel Catch-22, “Just because you’re paranoid doesn’t mean they aren’t after you”.

Following the initial online publication of Deep Web for Journalists. Pearce has had to institute a process of continuous revision to reflect what he calls “a constantly-changing game of cat and mouse”.

“Techniques that might work today might not work tomorrow,” he writes. “In the brief period since this book was first published, a number of groups offering cyber-security and counter-surveillance technology have been forced out of business or outright compromised.”

He has even appealed to readers to help him track sites that disappear and to this end is providing free updates of the US$9.99 e-book.

Not all media professionals or ordinary citizen-consumers will feel they need Deep Web for Journalists, though ultimately even those toiling in tabloid papers, infotainment programs or glossy magazines may find their e-secrets used against them in unforeseen ways by unpleasant people.

But if journalism itself is to continue having any credibility and value to society, real journalists will have to defend it from those who believe it is just an add-on to civil society, some irritating pop-up that gets in the way of their desire to control, commodify or scam us.

Deep Web for Journalists is available from http://deepwebguides.com.

[This article was first published in DogBitesMan.net in August 2013.]

[i] The Committee to Protect Journalists listed them among the top 10 most censored countries in the world in May 2012.

[ii] Freedom House’s latest 2013 Freedom of the Press Global Survey of Media Independence found that “less than 14 percent of the world’s people … live in countries where coverage of political news is robust, the safety of journalists is guaranteed, state intrusion in media affairs is minimal, and the press is not subject to onerous legal or economic pressures”. The US is ranked 23rd, Britain and Australia are 33rd, while North Korea and Turkmenistan are joint last of the 196 countries listed.