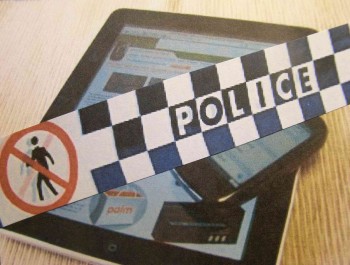 Arrests of working journalists by Australian authorities remain a continuing threat to media freedom in the country. Even when those arrests are not followed through to prosecution, they still send a chill through working journalists, impeding their efforts on our behalf. And while social media comes ablaze with indignation whenever journalists are arrested, the media companies themselves are often noticeably mute.

[The following article was originally published on DogBitesMan on 31 May 2011.]

If the price of freedom really is eternal vigilance, then many in the media are not paying their dues.

Admittedly, the arrest of journalist Ben Grubb by Queensland police and the confiscation of his iPad sent momentary frissons of outrage through parts the Australian media establishment, but almost all of them just as quickly doused their fury in favour of business as usual.

Yet in the New Information Age, the incident should have remained one of the most significant media issues of the year.

A young technology journalist in the everyday course of his duties covers an Internet security conference on the Gold Coast.

The journalist is approached by police, who question him and ask for his iPad where, they assume, he has kept all his notes and other details of the story. He demures so they arrest him and take the iPad anyway. He is released about an hour later without charge but his iPad is not returned.

As any half-decent journalist should recognise, it was a classic police ploy to get his notes without going through the process of obtaining a court order.

And it raises a host of issues the media should be exercising itself with but isn’t.

The most important is, of course, the ongoing defence of the rights of a free media within a democratic society. Without the ability of journalists to speak to people and gather information freely without fear of intimidation, we might as well all be living in North Korea where the truth becomes anything the current Kim wants it to be and citizens live constrained lives wholly at the despot’s whim.

Journalists and the police have always had turbulent relationships, sometimes working together for the community’s good and sometimes at odds about what that good might be and how it might be achieved. That is why the media has been called the Fourth Estate – because it is not part of the establishment, the other three estates.

Most of the time journalists work very happily with authorities and within the law, but on occasions they must step outside it to do their job properly. Most of the great journalistic exposures of corruption in Western societies have involved people breaking or skirting the law in some way, whether it is handing over or receiving documents to which they are not entitled or revealing things they are legally bound to keep secret. The Watergate revelations which brought down an American president in 1974 would probably not have happened had Bob Woodward and Carl Bernstein of the Washington Post not agreed to hide the identity of Deep Throat, their principal source within the Nixon Government. (He was finally identified 20 years later as Mark Felt, Associate Director of the FBI during the Watergate years.)

Journalists are ethically bound to protect their sources when required and many have been threatened, prosecuted or jailed in Australia for refusing to name a source, among them Tony Barrass, Joe Budd, David Hellaby, Chris Nicholls, Deborah Cornwall, Michael Harvey, Gerard McManus and the late Peter Hastings. None of these was an anarchist or bomb-thrower. They were genuine family men and women, upright citizens trying to do a difficult job as ethically as they knew how.

The recent and belated introduction of “shield laws” in Australian now offers some protection to journalists wanting to protect confidential sources, though there are several hoops through which they must jump to avail themselves of legal protection.

It still remains a truism that for police the tracking down of a journalist’s sources by legal means and for journalists the legal processes to defend their freedom both remain long, convoluted and essentially hit-and-miss, so journalists continue to hide their information and police resort to short-cuts such as those they used to get their hands on Ben Grubb’s iPad.

Neither Detective Superintendent Errol Coultis who arrested then “un-arrested” Grubb at the AusCERT security conference nor Fraud Squad head Brian Hay who justified his colleague’s actions as in some way similar to investigating the theft of a stolen TV set are junior officers unfamiliar with the law. Both would have known the legal process for obtaining a journalist’s notes but they chose to either circumvent it or to justify their behaviour as some kind of standard police procedure when dealing with petty crime.

This is not to argue that journalists have a special right to operate outside the law, even if they sometimes have a moral duty to do just that. And it is likely someone who has had their TV set stolen might have more sympathy for DS Hay’s views than for Ben Grubb’s loss.

And there will be all sort of excuses as to why the police action was either justifiable or not worth worrying about, ranging from “that’s how Queensland police operate” through to “journalists should not get precious over a single, simple regrettable incident” – though it should have alarmed Australians to read on the same page as the Sydney Morning Herald’s report about the Grubb affair an article on how the country’s security agency ASIO is getting even greater legal powers to spy on its own citizens.

The real wake-up call is for members of the Australian media, especially editors and publishers.

It was instructive that the most immediate support for Grubb came via new media, with many of his 5,000 Twitter followers lighting up the Twitterverse with indignation. And although media like the ABC and Grubb’s own employer the Sydney Morning Herald tried to keep the controversy alive with follow-ups and expert comment, the old mainstream media has largely moved on, leaving the field to the online community, such as the iiNet Blog’s Matt Jones.

Where are the major newspaper groups and broadcasters, the editors and proprietors one might think would have a huge interest in issues such as this?

Australia’s Right to Know Coalition[i], comprising the nation’s “12 major media companies”, has been missing-in-inaction since an initial, much-trumpeted flurry of activity in 2007, an absence noted by Crikey’s Margaret Simons more than a year ago. At a time when their leadership would be most use, they have deserted the field.

Realistically, of course, getting concerted action from media companies who are at each other’s throats every day of the week was always going to be a big ask.

The generally moribund Australian Press Council, which represents the major print publishers and purports to be “a defender of press freedom”, has also been notably silent on the issue. The Council website claims it “scrutinises legislation, court decisions and any activities of politicians, courts, newspaper proprietors and others that might threaten press freedom. Where appropriate it issues press releases, and makes submissions …” A fortnight after Grubb’s brief arrest it had issued no public statement and a search of its website reveals no mention of the case.

Beyond reproducing a news item about the Grubb affair, the Newspaper Publishers’ Association has also been alarmingly absent from the debate to-date.

If the main media bodies won’t act, who will?

Some commentators argue that the police need to get up-to-date with the realities of social networking, although asking the police to play nice is not going to give reliable, long-lasting comfort to investigative journalists. An editorial in Fairfax newspapers concluded: “The police themselves have acknowledged the challenge the internet represents for them. It is a challenge to lawmakers too.”

But realistically, journalists and their editors must look to their own security and safety.

New technologies such as iPads have enormous benefits but also pose new challenges, not least of them security.

On the positive side, whereas old-fashioned notebooks or recorders contain physically-accessible content, even in shorthand or encrypted files, today’s mobile devices need not even house a physical copy of a reporter’s notes or interviews which authorities can confiscate.

While there is still debate about how safe Cloud computing actually is, properly encrypted data stored in the Cloud or on remote servers is probably more secure than keeping sensitive information on a laptop or iPad. And with the massive computing power available to today’s major media, it is an abrogation of their duty not to have secure remote means of storing their journalists’ work.

That will still not protect the material from a properly obtained and executed subpoena, but at least the police will have to engage with the company’s specialist lawyers before they can access confidential information.

For the rest of us in the informal media economy, necessity and innovation are the best drivers to protect our sources and information, coupled with agility and the ability to forget file names, server addresses and passwords under police pressure.

With the growing acceptance that the Internet and especially social media are moving beyond strict regulation, it is the old established media who have most to fear from inaction over cases such as Ben Grubb.

[This article was originally published on DogBitesMan on 31 May 2011.]

[i] It is worth noting that some members of the coalition have individually covered the case on their news and op-ed pages and in radio and TV programs and that the journalists’ union, the MEAA, has expressed concern.