Home  »  Featured • General • Media   »   The many voices of one Australia – just not inside the building please! 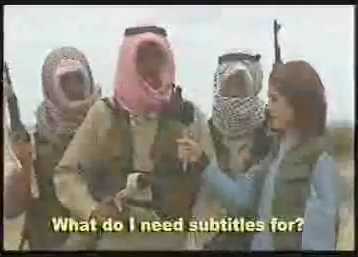 [This article was originally published on DogBitesMan in May 2010]

On its own, the shedding of more than 10 jobs in SBS’s relatively small Subtitling Unit could simply be a sad necessity, a realistic remedy for straitened economic times. SBS has limited funds, is not immune to economic downturns and must adapt to changing demands for subtitling foreign programs.

SBS managing director Shaun Brown gave a Senate Estimates committee on Monday the reasons for what he called “surplus capacity” in Subtitling:

“Firstly, technology has changed and consequently there are more efficient ways of subtitling and there are further technology changes due in SBS. Secondly, we anticipate on SBS2 in particular an increased level of subtitling that comes with the program from overseas. The quality of those subtitles has improved markedly. … Thirdly, because we only carry subtitling in-house for certain languages, the match between those languages that we have capacity for and those language programs that we want to put to air is never going to be perfect.”

SBS currently employs approximately 35 full- and part-time subtitlers and about 15 casuals, already a significant reduction in numbers from its heyday of 60 staff. Subtitlers say they are the last refuge of multiculturalism within an essentially Anglo SBS TV.

Brown told the senators no languages or individuals had then been identified for the axe, although staff report that the previous Wednesday the unit’s manager had started to give individuals a “heads up” which left at least one subtitler in tears and three others in no doubt their jobs were gone, before the sessions were abruptly stopped. Brown and the Community and Public Sector Union’s National President Michael Tull will meet on Friday.

The truth is SBS doesn’t have enough money to do everything it wants. It never has had, though critics argue that its appetites have risen faster than its resources in recent years. Certainly its senior executives chew up a sizeable proportion of its $260 million budget. In 2008–09 (pdf), Brown and his six highest paid senior executives together received more than $2,175,000.

Brown’s explanation to Senate Estimates was hard to argue with, but it is his solutions which are causing alarm within and beyond the Subtitling Unit. They fear this signals the beginning of the end of subtitling within SBS and of all the benefits that go with having what was once unquestionably the best subtitling service in the world.

And many critics see this as yet another example of what one former managing director has called the “failed business model” of the Board under former chairman Carla Zampatti, which is ironic because that board was appointed almost wholly for its business credentials.

As a fashion designer Zampatti should have recognised the need to protect the brand and maintain consumer loyalty. Change is the lifeblood of the fashion industry, but the Zampatti label is admired as much for where it doesn’t go as for where it does. In trying to shift SBS into a space already overcrowded by the big three commercial television networks, she led SBS down a dead end.

And at a time when it was critical for SBS to remember the business it was in — multicultural broadcasting — the board and senior executive were stripped of almost all expertise. At one point, of nine directors only Zampatti herself and Aboriginal businessman Joseph Elu could claim significant non-Anglo backgrounds.

The senior executive headed in the same direction. Although expanded to nine under Brown, only one — the head of radio — was discernibly “ethnic”. On arrival from New Zealand, Brown could recite the values and value of multiculturalism but had little experience of its uniquely Australian manifestation. Many of his executives had less.

But ill-considered “mainstreaming” and a failure to understand the value of SBS’s multicultural brand weren’t the only aspects of the business model the Zampatti board got wrong. The ideology-driven move towards harder-edged commercialism — including ads within programs — not only alienated large, loyal sections of its audiences but it took the board and executive into areas of commerce where they were often ill-equipped.

Perhaps the most glaring example of this has been the board’s love of outsourcing, a fate some think is in store for SBS Subtitling.

Since 1994, SBS had used SBS Independent to fund local production partnerships, to the benefit of viewers, independent producers and the corporation’s bottom line. But under the Zampatti board, outsourcing became an ideological end in itself. Critics said it had become a vehicle for funnelling taxpayers’ dollars into the private sector. By 2006 SBS was out-sourcing most of its television production, excluding news and current affairs, when the board set out to outsource the entire multimillion dollar television playout system.

Deloittes, who do most of SBS’s business consultancy, ran the tender project, named STRAPS 2. Red Bee Media, a British-based former BBC company owned by the Macquarie group, emerged as the cheapest to provide a complete outsourced service. But it would cost approximately $50 million over 10 years, compared to only $27 million to do the work in-house.

Deloittes then provided three “model sensitivity scenarios”, varying some of the key assumptions which closed the gap between the in-house and outsource options, though not enough. Despite modellings which increased in-house costings and decreased the outsource fees by up to 50 per cent, the best scenario they could find still left the outsource option more expensive by $3 million.

However, the board’s Digital Sub-Committee “determined that an outsource option was preferred in principle” and on 6 March 2007 SBS announced it had chosen the outsourced solution by Red Bee. Nowhere did the media release mention the relative costs of the project.

A year later, on 23 February 2008, SBS quietly admitted the deal with Red Bee Media was off. It never publicly explained why.

Back to the present and the cuts to SBS Subtitling, again the outcome of a Deloittes review.

Red Bee Media owns Red Bee Media Australia, encompassing the former Australian Caption Centre and the country’s biggest supplier of captioning services. On 15 May 2010, the same week SBS was preparing subtitlers for redundancy, Red Bee announced (pdf) it was renewing its contract to provide closed-captioning to SBS. Ironically, while Red Bee Media was making capital from its specialist services, SBS was devaluing its own speciality.

And that’s a problem with outsourcing something unique; you can end up handing your expertise to someone else to accumulate and then sell back to you at a price till eventually you have nothing left that makes you special.

In the case of SBS subtitling, this could mean outsourcing more work to a company such as Red Bee who, because they don’t currently have a similar language subtitling capacity in Australia, could either hire ex-SBS subtitlers at their cheaper rate or send jobs to their subtitling operations overseas.

As if this wasn’t alarming enough for SBS employees, talk has re-emerged of selling off SBS’s most lucrative asset — its $64 million Sydney headquarters — and moving into an office block. It may just be talk, but with so many functions now outsourced, its cavernous Artarmon studios vacant most days and digital technology allowing news bulletins to be presented from a studio no larger than a suburban lounge room, SBS could either try again to outsource program playout to an aggregator like Red Bee or even use the ABC/WIN TV multimillion dollar Media Hub facilities now being built at Ingleburn in Sydney’s west.

There is, of course, the question of studios in Sydney and Melbourne to produce SBS radio’s annual 15,000 hours of Australian programming, but radio has been rationalised and downsized over several years and has not been the main driver in SBS since the advent of SBS TV in 1980.

The SBS board has argued with some justification that without new money its options are limited. In the run-up to this month’s budget, Brown did the rounds lobbying for more money for multicultural programming. He repeated his pleas at the Senate Estimates hearing. So far those appeals have largely fallen on deaf ears in Canberra, though privately Communications Minister Stephen Conroy is said to be open to increasing SBS funding if he sees real evidence of a return to a more multicultural focus under the new chairman Joseph Skrzynski. Conroy appointed a second director of non-Anglo background last year and will announce another appointment next Friday. If that person has strong multicultural credentials it will assist Szrzynski and send a strong signal that the Zampatti era is over.

It’s also possible Conroy may order another review of SBS before the next triennial funding round in 2012 and he will certainly be watching closely what further progress the new SBS board makes in reining in Brown and his executives to focus on things SBS has traditionally done better than anyone else in the world. The surviving subtitlers will be hoping that includes them.

[This article was originally published on DogBitesMan.net in May 2010]