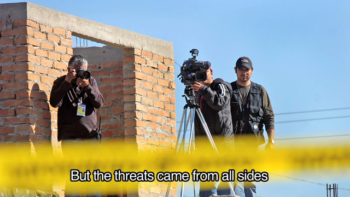 [This article was originally published in April 2008.]

The death of TV cameraman Fadel Shana in the Gaza Strip highlights yet again the dangers faced by many journalists when doing their job.

The 23-year-old Reuters cameraman was killed on 16 April 2008 by a shell from an Israeli tank. Eye witnesses say the tank fired directly at the group of journalists who were covering the aftermath of an Israeli air strike.

Video footage from Shana’s camera shows he may have filmed the shot which killed him.

The Israeli army has denied it targeted the media party and says it is investigating.

His death brings to eight the number of journalists killed in Gaza and the West Bank since 2001, according to the Committee to Protect Journalists, an organisation which monitors attacks on journalists throughout the world.

Altogether, the CPJ says that by mid-April 2008, seven other people throughout the world had been killed while working as journalists. They died in Afghanistan, Bolivia, Iraq (2), Pakistan (2) and Somalia. They list a further six unconfirmed cases in Iraq (2), Mexico (2), the Philippines and Russia.

Between 1 January 1992 and 4 April 2008 they list 685 journalists killed because they were doing their job.

These figures reinforce how dangerous journalism can be. This has always been recognised for reporters and camera crews in war zones. But what the CPJ figures also show is that journalists are being killed almost every week somewhere in the world, even in countries where there is no state of open warfare.

While many of these countries have experienced war during this period, others have not and still journalists there are being killed.

While 27 per cent died in combat zones or on dangerous assignments, almost 75 percent were murdered – because they were journalists.

The biggest single source of suspected killers – 31 percent – was political groups, but a similar percentage of killers were reported as the military, paramilitary or government officials.

And despite the coverage that deaths of foreign correspondents and camera crews receive in the world media, 85 percent of all journalists were killed while working in their own country.

One of the most prominent deaths in recent times was the Russian investigative journalist Anna Politkovskaya, who was shot on 7 October 2006 in her Moscow apartment building. It is generally believed she was murdered because of her reporting on corruption and civil rights abuses, especially in relation to the war in Chechnya. Her killers have not yet been brought to trial.

For more on the Committee to Protect Journalists, go to their site at: http://www.cpj.org/. Go to their ‘Press Freedom Archives’ for a database on all their reported cases.

[This article was originally published in The News Manual in April 2008.]

The CPJ continues to work to expose killings, imprisonments and harm to journalists around the world. It continues to maintain a Database of all journalists killed, imprisoned or missing each year and over time.

Another organisation established to watch over the rights of journalists is Reporters Without Borders (RSF). In December 2017 it reported that a  total of 65 journalists were killed that year, 326 were currently in prison, and 54 were held hostage.

It said the 65 journalists who were killed were either fatally injured in the course of their work (for example, in an artillery bombardment) or were murdered because their reporting angered someone. The murdered reporters were the majority – 60 percent of the total figure.

RSF is reported as saying that although these figures were alarming, 2017 had been the least deadly year for professional journalists (50 killed) in 14 years. Journalists are of course fleeing countries such as Syria, Yemen and Libya that have become too dangerous, but RSF has also observed a growing awareness of the need to protect journalists. Many media companies and specialist institutions now provide training for staff working in dangerous conditions. The Dart Centre for Journalism & Trauma is one of them.

For more on some of the practical issues behind this story, you can look in the following chapters of The News Manual: