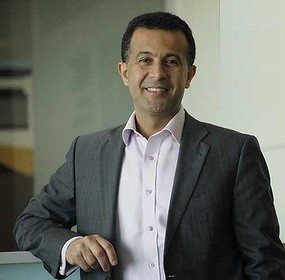 Will SBS’s next managing director, Michael Ebeid, provide the spark to reignite a passion for Australia’s multicultural broadcaster? Many people hope so but at present hope is all they have. So little is known about the man himself.

Egyptian-born, Australian-raised Michael Ebeid is such a cleanskin he’s almost translucent. Of course, many people rise to senior public jobs out of left field, but there’s usually a trail of some sort. With Ebeid there’s not much.

Even a well-connected former Board member of the ABC, where Ebeid is currently Director of Corporate Strategy and Marketing, admits to knowing “nothing about him”. According to this source, Ebeid hasn’t exactly left a trail of achievements in three years — but acknowledges that achievements in Ebeid’s area of responsibility often don’t have a public profile.

So who is Michael Ebeid and what does his appointment to the top job in Australia’s second national public broadcaster portend?

Most observers agree he seems a nice enough bloke. He is variously described as intelligent, smart, articulate, personable, consultative and approachable. In fact everything you’d want in a good friend or a boss. And he’s young, tech-savvy and the first MD to enter SBS with his own Twitter account.

But is all that enough to haul the once-admired SBS back from the brink of irrelevance? Is he sufficiently driven, tough and experienced for the task?

Certainly he is probably the least qualified managing director for many years in terms of professional journalism or program experience, two qualities by which SBS has always defined itself.

Although the first managing director, R.E. Fowell, came from commercial radio, his successor Ron Brown was a professional public servant — but both in their way suited the times. Between Fowell’s appointment in 1978 and Ron Brown’s departure in 1987, SBS functioned as a start-up public service broadcaster, beginning with a multilingual radio service then adding a fledgling television station.

But the next four MDs all had varying degrees of experience in broadcasting and/or journalism. Hawke appointee Brian Johns had been a journalist and book publisher. Malcolm Long was Deputy Managing Director of the ABC. Nigel Milan had a long and generally successful career in broadcasting including the Australian Radio Network and Radio New Zealand. The current MD Shaun Brown was a journalist and TV executive from New Zealand.

The fact that Ebeid has no practical experience in radio, television or news production — SBS Chairman Joseph Skrzynski had to argue that Ebeid had managed media-related functions at Optus and the ABC — has many people inside and outside SBS worried. But then again, Shaun Brown had oodles of experience and is leaving the national broadcaster in a perilous and parlous state.

Ebeid has going for him five important factors.

Number one, he is the first managing director in the multicultural broadcaster’s 33-year history with a bona fide non-English speaking background. He may not be any better known in multicultural Australia than in the world of broadcasting, but he will intuitively understand the complexities of cultural and linguistic diversity. This fact alone will let him honeymoon for at least six months safe from criticism that he’s another “Anglo” telling “ethnics” what to do and what to watch.

Given Skrzynski’s apparent desire for SBS to return closer to its multicultural roots after straying under the Board headed by Carla Zampatti, and given the current attempt by the new Chairman of the Federation of Ethnic Communities Councils of Australia (FECCA) Pino Migliorino — who is Ebeid’s generation — to kickstart a defence of multiculturalism, there might be enough chemistry to create a spark.

The second thing going for Ebeid is that he will have political support in Canberra. Communications Minister Stephen Conroy obviously backs Ebeid’s appointment and it has been suggested that Ebeid will be in sympathy with the Labor Government.

Thirdly, Ebeid claims a good track record in financial management, having increased the revenue of Optus’s Consumer and Multimedia division from $560 million to $1.8 billion in four years. Skrzynski is a financier by trade and SBS needs a boost in revenue.

Ebeid’s fourth positive is, perversely, that he doesn’t have a significant background in broadcasting or news. Not only can he distinguish himself from Shaun Brown as more qualified in other ways, he will actually need to attract talent to fill the gaps and to support him, especially in his role as editor-in-chief.

Brown is leaving behind him a weak senior management team, almost all of them his appointees as Head of Television and then as MD (not one of whom was considered worthy to replace him). Under Brown — who likes control and dislikes dissent — SBS lost decades of experienced professionals some of whom were replaced by managers on the edge of their competence. When the veteran Head of Radio, Quang Luu, left six months after Brown became MD, a Senate Estimates committee was told his replacement, Paula Masselos, was insufficiently experienced. She was allowed to run out the final months of her contract at home.

Ebeid’s first task — and the first indicator of how well he will perform — should be to drastically re-engineer management at the broadcaster. He is allegedly not a man inclined to slash-and-burn, but unless he asserts his presence immediately with dismissals, more rigorous performance management and some clever new appointments, hope for reform will be dashed.

For this is no ordinary succession, no simple passing of the baton. Despite management protestations otherwise and claims in 2009 that SBS TV had lifted its annual evening audience by 22 per cent, the fact remains its audience share still wallows in the single digits. That 22 per cent reflected a rise in audience share of just 1 per cent over five years — and left SBS still well behind the other networks. Until relatively recently it had not seen a significant increase in its base funding for several years and is now $3 million in debt. It has lost a swag of on-screen talent, advertising revenue is below target and its profile has seldom been lower.

In 2009 SBS management asked staff for feedback on their performance and got a resounding thumbs down in several areas. Brown put in place reforms and recently polled staff again. While the results have been kept under lock and key this time to prevent further negative publicity — always hypocritical in a news organisation — SBS management does not seem to have made much headway in major areas. When 180 radio staff were asked why only half of them had filled in the new questionnaires, managers were told in no uncertain terms that many people could not be bothered because they saw no signs of improvement.

Taken on their own, these might be seen as a measure of how difficult it is for a broadcaster such as SBS to thrive with specific public obligations and limited resources. But given that the Zampatti board removed almost all constraints on ratings and revenue raising by reinterpreting the Charter to make it almost as broad as the ABC’s, allowing in-program advertising, slashing costs and outsourcing major functions, the lack of significant success is damning.

And this is Ebeid’s fifth strength — he is not Shaun Brown.

Whatever Ebeid’s qualities and experience — or lack of it — he has the dubious freedom to try almost anything knowing he can’t do much more harm.

There is even renewed talk of a merger with the ABC, though for the SBS Board to appoint someone like Ebeid from the ABC would be a decidedly odd way of achieving that — or even of signalling an openness to the idea. If SBS were going to merge, they would presumably want someone other than a former ABC executive as MD in order to protect their interests during negotiations.

While we may see greater cooperation in back-office functions such as human resources, finance, studio operations and engineering beyond what is already being done or envisaged by people such as the ABC’s Mark Scott, any closer co-operation in areas of program production and commissioning, radio and news and current affairs would effectively be a merger anyway and Australia might not yet be ready for such a step.

Ironically, the more successful Ebeid is the further away that vision will recede.

One of the reasons SBS radio broadcasters are now generally in favour of a merger after opposing it for decades is they think that they will survive under the ABC — and that their managers will not. Whether the wider community — especially ethnic Australia — is ready for a merger is another issue that will probably not have to exercise Ebeid’s mind in his first few months.

His first job is to get the SBS train back on the tracks before he starts thinking about repainting the livery.