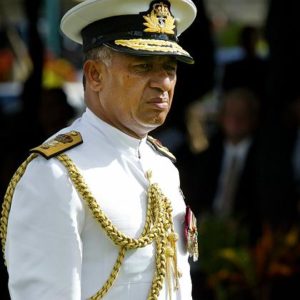 [This article was first published DogBitesMan and in New Matilda in April 2009.]

As the war of wills between the military and the media in Fiji intensifies, the growing question is: Who will blink first?

These measures have been rigorously enforced by the army, with military censors in newsrooms and armed soldiers overseeing the arrest and questioning of local and foreign journalists.

Bainimarama certainly isn’t winning the battle of ideas or the public relations campaign either at home or internationally, but he is well ahead on the psychological warfare front, and to a soldier — especially one who was running out of patience with persistent criticism and legal setbacks from civilians — that might satisfy him until something better comes along.

For their part, the media — as with a growing proportion of Fiji’s civil society — are at present only able to fight rearguard actions. They tried leaving blank spaces in newspapers and cancelling news bulletins which had been censored, but the regime speedily banned these practices. Editors made formal objections and local journalists tried to get their stories out to overseas media, only to be hauled in for “questioning”.

In the end, the best that some outlets feel they can do is impose their own ban on reporting politics, both pro- and anti-government: on Monday the Fiji Sun ran the front-page headline “We ban politics”, and the Daily Post has made a sarcastic jibe at the restrictions by filling its pages with headlines such as “Man gets on bus”. As a demonstration that they still have some control over content and that their objectivity can’t be suborned, these outlets have captured the moral high ground. Thus far, however, it has been largely ineffectual in influencing the regime’s behaviour.

One of the problems with tit-for-tat wars of attrition is that carrying out a threat means the threat itself has failed as a tactic. The Fiji media could, of course, go the whole hog and shut down voluntarily until the restrictions are lifted, though whether this would break the cycle or simply enrage the regime’s hardliners is difficult to gauge.

To threaten the schoolyard bullies that you’ll go home probably makes sense when they are armed with assault rifles, but it is only postponing the inevitable — either a physical clash or the bullies back down. And a military backdown is what must inevitably happen in Fiji.

The tragedy of this situation is that Bainimarama’s frustrations have led him into an ill-judged battle with the very pillars of the kind of society he is purporting to want to foster. The Fiji media are at the forefront of the battle with the regime largely because they represent modern democratic Fiji: a free-speech democracy and a society which will never return to the old authoritarian ways of chiefs and fiefdoms. This is not because of the influence of foreign-owned newspapers and broadcasters, but because of the journalists themselves.

While much of the rest of the free world has grown jaded and disbelieving of their media, in my experience the Pacific media are beacons across the region. Since the major decolonisations of the 1960s and 1970s, educated young Pacific islanders have been passing through cadetships and a handful of journalism training schools in countries such as Papua New Guinea and Fiji. A whole generation of talented and energetic Fijian journalists committed to some of the basic principles of the profession often lost in more advanced and cynical societies — principles such as fairness, fearlessness, objectivity and hunting down the truth — simply have nowhere else to go and nothing else to do even if Bainimarama could permanently close down the media, which he patently cannot do.

The outpouring of support for Fiji’s journalists from their colleagues internationally has been remarkable. Leader writers in Australia, New Zealand and throughout the region have condemned the media suppression, as have media unions, academics and organisations such as the International Federation of Journalists and Reporters Without Borders, supported by people and politicians all the way from The Lodge to the White House.

In the end, though, it will not be international condemnation or even sanctions that will end the stand-off, but the resistance of the media and people of Fiji themselves.

Bainimarama and his troops have built a reputation — certainly in their own eyes, if not the world’s — as hard men keeping the peace in Lebanon, Iraq and East Timor by force of arms, but even they know that cannot work back home for any length of time. While Fiji has suffered four military takeovers in 20 years, the troops have hitherto always had to return to barracks and let the civilians govern again.

This time will be no different and Bainimarama is already hinting at an end-date to the current repression. He may keep his word and Fiji will muddle through to democracy again, but his long-term concern should also be whether he manages to handle the retreat with enough grace and humanity as to leave some honour in his people’s memory of him.

He clearly wants his legacy to be as a man who tried to fight discrimination and implement reform, but he should be aware the Fijian people’s remembrance of him will be shaped largely by the very journalists he is bullying now.

[This article was first published DogBitesMan and in New Matilda in April 2009.]

You can read more on some of the practical and ethical aspects of practising journalism under oppressive regimes in Chapter 58: Pressures on journalists in The News Manual.